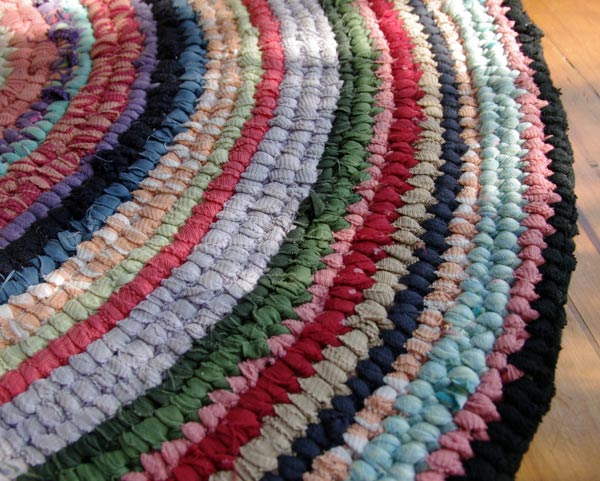 In the last couple of nights I have returned to my toothbrush rag rug, and have now added four and a half revolutions since I last shared a picture.  Two of the rings (pale turquoise, near the edge) were made out of an old pair of pyjama pants that I have. 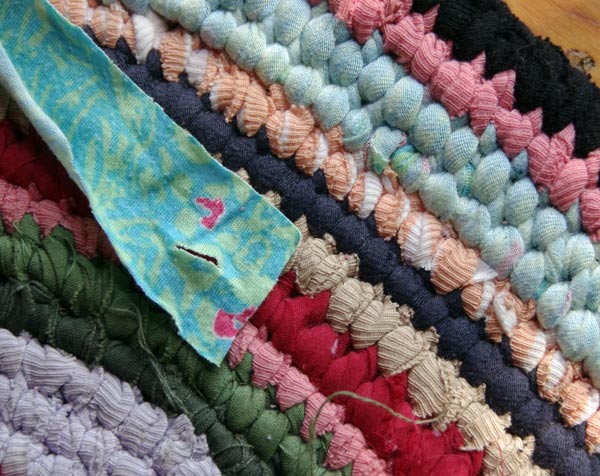 The pants were actually a darker print, (you can see the scrap laying on the rug) but they curled up to the wrong side, and became a much softer, lighter colour.  The pyjama pants were constructed out of a Viscose/Elastane knit.  All I can say is beware Viscose, it grows!  These pants gradually ‘grew’ 4 inches longer and quite a bit wider than they started, until I could no longer wear them.  The drape of Viscose is really nice though, and we are seeing a lot more of it in the stores, since cotton prices went up.  Just be aware of this stretching tendency if you buy anything made of it. 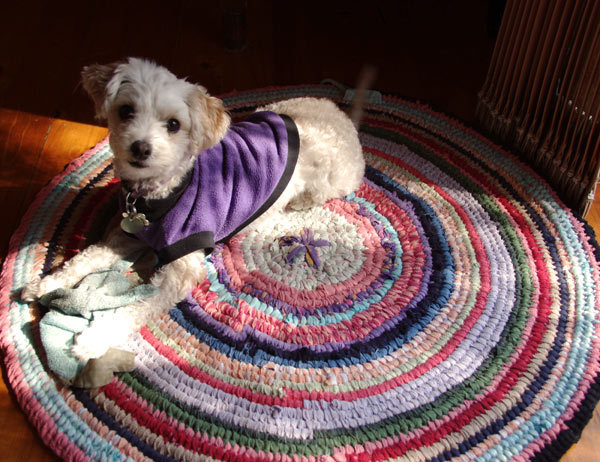 Lotta is pretty fond of the rag rug.  As soon as I moved it into the sunlight to take a picture, she grabbed a toy and came and sat on it, (yes that manky looking rag between her paws is “bunny” which she has had since she came home with us).

If you want to know more about toothbrush rag rugs, you can read my post here.

* many of you will recognize this song as “You Spin Me Round (Like a Record)” by Dead or Alive from 1985.  Speaking of the 80’s, Luke and I have just finished watching the first series of “Spirited” via itunes.  “Spirited” is about Suzy, an uptight dentist who has left her husband (played by Claudia Karvan) and Henry, the ghost of an 80’s rock star, (played by Matt King).  We have really been enjoying it.  Below is the original promo (which has “You Spin Me Round” playing in the background) …

Have you been watching anything good lately?