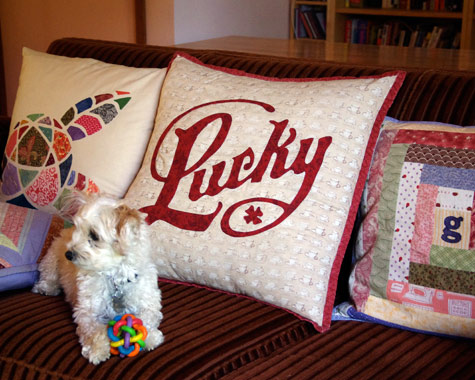 4 years ago, I made 3 cushions out of some fabric that I purchased at Purl Soho, when I was in NYC.

The beautiful Yuwa fabric, which features cups of tea, has faded (through use) on the front, but not the back (you can see the back in the photo above).  Because the teacups are in such a neutral colour, I decided to revive the cushions with new motifs on the front, rather than retire them.  I decided that at least one of them needed to be decorated with Typography, preferable something swooshy. 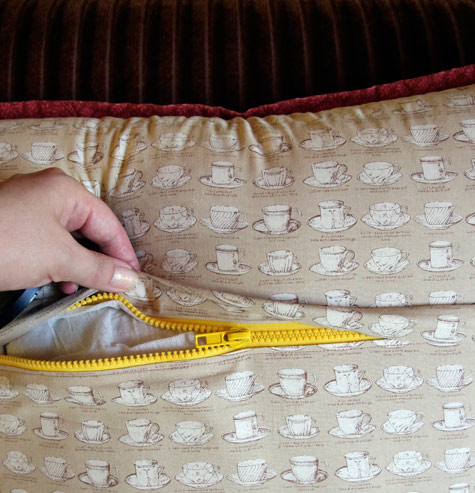 So I found part of an old, hand-drawn logo that I liked on Pinterest, traced the part I liked, and used fusible web to cut out the lettering in nice fabric.  When it came to ironing the lettering onto the cushion cover, the chunky zip on the back was a bit of a sticking point.  The zip is usually covered, and is bright yellow because it came off another cushion – I’m thrifty you see, but that was not the problem.  In order to iron on the lettering, I needed a nice flat surface, and the chunky zip was mounding up the cushion cover, right through the middle.

So I had a great idea – I would iron on the lettering, while the cover was still on the cushion, making the cushion-front nice and flat, which brings us to my first fail.  It didn’t occur to me that the cushion-insert had it’s own covering of synthetic fabric.  While I merrily ironed on the swooshy word, I was also fusing the cushion cover to the cushion insert.  After it had cooled, and I had made my discovery, I carefully peeled off as much of the fused fabric as I could and tossed the ruined cushion-insert out. 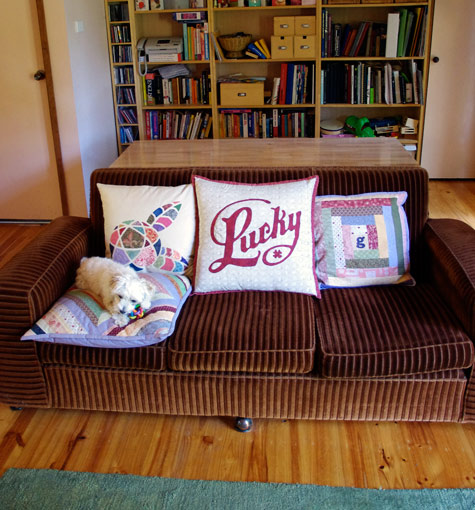 Which brings me to my second fail.  I decided to send my hubby (at work) a short message, so that he too could have a laugh at my expense.  I went looking for a link to the original, really old, hand-drawn logo to show him.  Turns out that the really old logo, which I found amongst genuine old logos, was actually from a very-much-current brand, (not available in Australia – so not familiar to me) and was not old at all.

Now this might not be your idea of a fail – but I very much believe that I should not be messing with other people’s intellectual property, and feel like such an idiot for not checking out the situation more carefully before I steamed ahead.  I am a bit ashamed at myself.  I felt OK about using an old, out-of copyright, and out-of-use piece of typography, (just for in my home, and not for profit) because it felt more like paying homage to it, and celebrating how beautiful it can be.

So I just wanted to post, to prove that not only do I have the occasional craft fail, but to say, using someones Intellectual property is dodgy, and not cool, and I apologise for not being more careful this time.

Have you had a craft fail lately?

PS:  This was going to be a post about Australia Day, (yesterday) and how lucky we are to live in such a beautiful and safe country – I don’t take that luck for granted, but it turned into a post about what a fool I am.

One thought on “Lucky. The tale of a craft fail in two acts.”