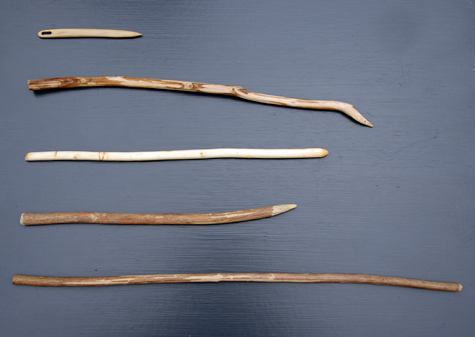 Can you guess which one is mine ?

OK – so that was pretty obvious.  Luke has made wands for the kids, (including an extra friend) who are going through a Harry Potter phase.  I was also a lucky recipient of a tool that is going to work magic – a hand made needle for rag-rug making. 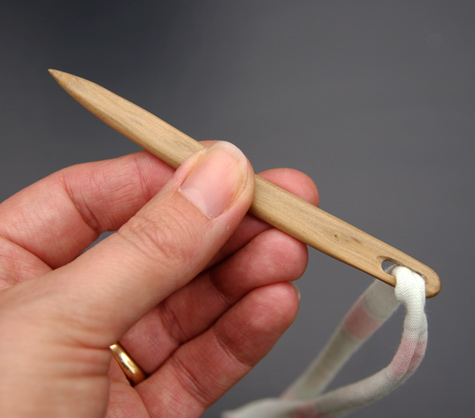 The needle is made of a piece of fallen Hakea branch, that has been hand-carved, sanded and oiled, just for me. 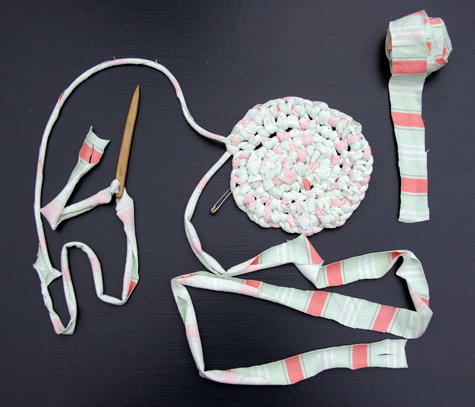 I have been planning on re-purposing some old clothes – turning them into rag-rugs for ages.  I can’t stand throwing out (as in, putting them in the bin) old, worn or stained clothes, that are too yucky to send to the salvos (thrift store).  I started stockpiling them ages ago, they are mainly old t-shirts, but the stripy fabric above is cut from one leg of some old pyjama pants. 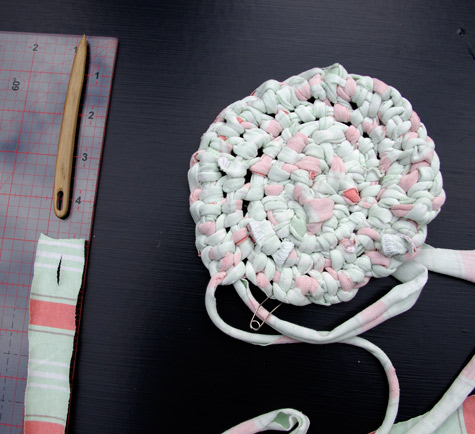 I just cut the fabric in a spiral, all the way up the leg, so that it ended up all in a strip 1″ wide.  It curls up on itself, but sadly the more vibrant colour ended up on the inside of the curl.

The rug I am making is actually called a “toothbrush rug” because the needles for this method were often made of old toothbrushes that had the bristle-end cut off, and filed to a point.  The fabric is threaded through the hole that the toothbrushes used to have on the end (presumable to hang them up). 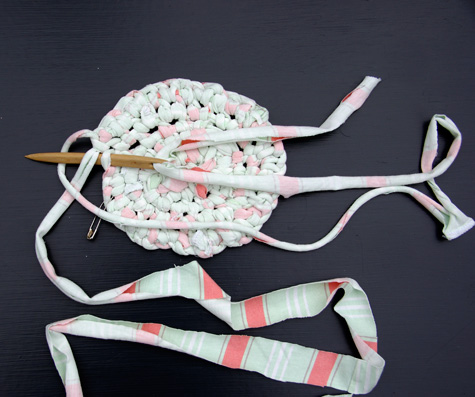 The rug is made with two separate strips of 1″ wide fabric, and the stitch is basically a version of buttonhole stitch, where one strip goes in through your previously worked knots, under the other strip and  back through its own loop.  When a strip is running out, you simply join another by looping them through small slits cut in the ends of them, it is rather ingenious.  You can have a look at the series of tutorials that I used, which start here. 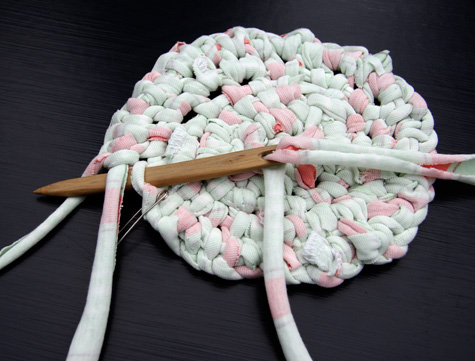 Just be aware that the tutorials make no mentions of making “increases” as you go around, and as the comments discuss, you will need to make “increases”, if you give this a go.  That’s why my baby-rug has that safety-pin in it.  It marks the beginning of a new circle, and I am changing the ratio of ordinary stitches to “increases” each time I go around.  I’m winging it, but it seems to be working OK.

It seems to be coming along fairly quickly – it almost takes longer to cut up the old clothes, than it does to knot them back together.  I can blame starting a new project on the wonderful Jodie, who gave me the nudge I needed to turn stockpiling into useful re-purposing.  She proposed a rag-a-long, and it seems that I am joining in!