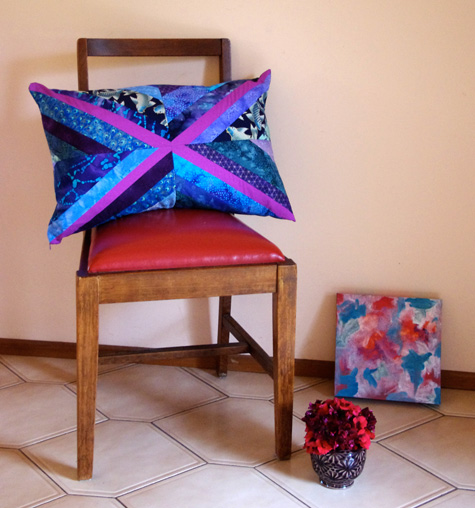 Back in October, I whipped up this cushion as a birthday gift for my sister Alison, whose birthday is early in November.  I used scraps from the quilt that Mum and I made her last year.  Amelia (Daughter number one) used the remaining scraps to start piecing a bag.  The two projects were so similar, that I surreptitiously used a picture of the cushion in the post about Amelia’s sewing efforts.  I have been waiting for ages to share a picture of the whole cushion here, because until today, I had not managed to catch up with Alison to give it to her. 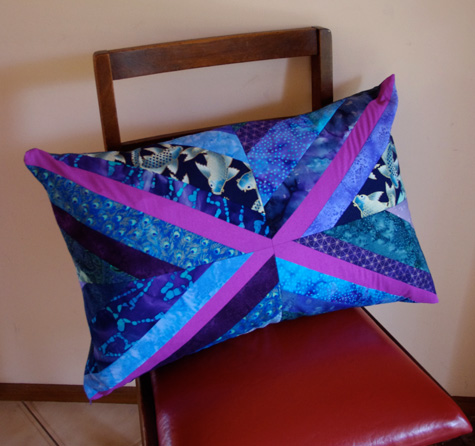 I completed the cushion with an invisible zip along one of the short sides, and the cushion insert is a lovely feather and down one from IKEA – plump and squishy. 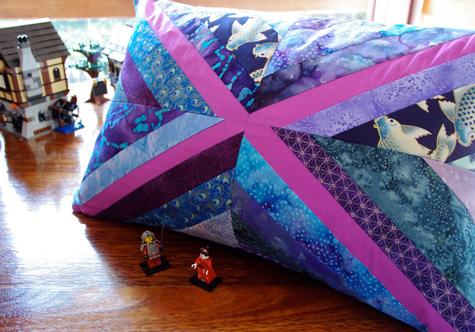 The cushion is so bright, and in such a different palette, to that of the decor in my house, that I found it quite a challenge to photograph.  I eventually found a few props that went with it quite well (see the photo at the top of the post).  The geraniums are two different types from my garden – both grown from cuttings, so I have no idea what they are called.  The canvas is an abstract painting that I add layers to occasionally.  This photo (directly above) is one I took with some Lego that happened to be on display at the time.  In the background are parts of Amelia’s “Medieval Market Village” and in the foreground are two of the mini-figures we have collected, who I thought went well with the oriental Koi on the cushion.  I didn’t think that photo was quite what I was trying to achieve, but it did make me smile.

Do you work hard to get your “props” right for photography?