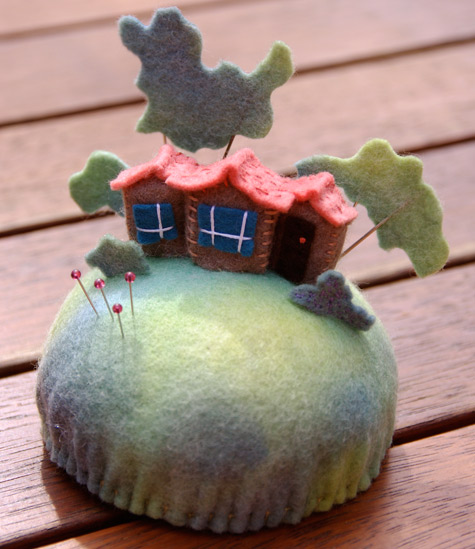 As I mentioned in my last post, the guild that I belong to held our biennial quilt show this weekend.  Part of the show was a “mystery challenge” which members entered anonymously, and this year the theme was “pincushions”.  This was my entry, a little house pincushion.

I was inspired by the wonderful teacup pincushions made by Mimi Kirchner, a fibre artist with a blog called “doll”.   She calls her pincushions “Tiny Worlds”.  Her little houses look like storybook cottages, with high peaked roofs, (as well as the occasional lighthouse) but I wanted mine to look more like a typically Australian house.  This tiny house is based on our first home, a very suburban, triple-fronted brick-veneer.  Australian suburbs are full of them.  I added some eucalypts (which surround our current home) made with needle trunks. 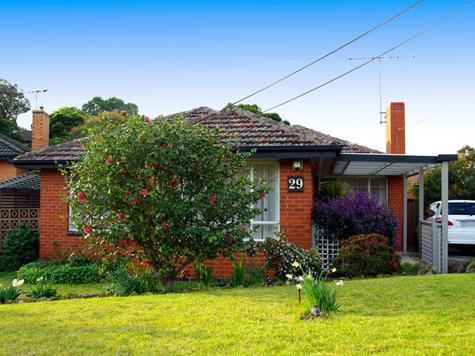 This is a photo of our first home which was used on the sales brochure when we sold it (the real-estate agent added the photoshopped blue sky). 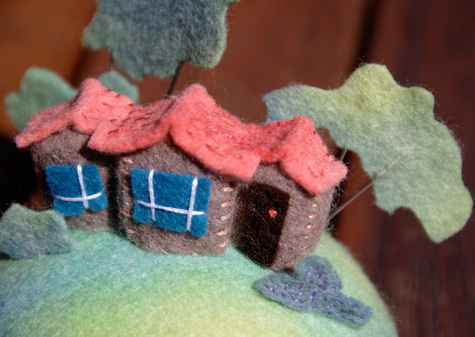 The hill of the pincushion is made of an upturned peanut butter jar-lid, covered in felt and stuffed with poly-fill.  The rest is made of felt, and embroidery thread.  The trees and bushes are simply shapes cut out of thick felt, with old needles through the middle, as trunks to fix them in place.  All the felt is 100% wool from Winterwood.

I am looking forward to using this as my pincushion, until now it has been a secret project, hidden away.  Some of the other entries in the challenge were fruits, a sewing machine, a hamburger, a turtle, an elephant and various patch-worked shapes.  The winner was a wonderful witch, stirring a cauldron, with pins stuck in her ample backside.  Do you have any elaborate pincushions?