The school my kids attend have uniform schoolbags, so the teachers encourage the kids to hang something distinctive from their bags so they can identify them easily.

I whipped up the little butterfly for Michaela by fusing the fabric straight onto batting, and quilting it in place, like a tiny, raw-edge strange-shaped quilt.

Rory’s Footballer had a long needed repair – he has been out with an injury for some time. 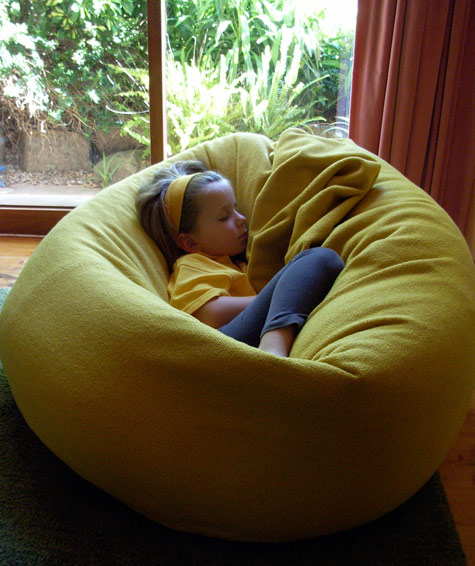 School is taking it’s toll on Michaela, she is getting very tired.  This is where I found her the other afternoon, in a little, colour-coordinated nest.

I felt like I needed a little nest yesterday, after a late night on Monday.  Luke and I (and some good friends) went along to the taping of Adam Hills’ new chat show “In Gordon Street Tonight” which screens tonight.  It was a lot of fun, but a very lengthy process.  We had to arrive at the studio at 5:45pm, and left about 5 hours later.

Adam’s guests included the distinctive Tim Minchin and model Megan Gale, which turned out to be an amusing combination (to me anyway) when Megan gifted Adam with some crystals, and mentioned Reiki.  Tim Minchin, (who is a musical comedian) is quite ‘on the record’ about thinking New Age beliefs are a load of bull.  His “Nine Minute Beat Poem – Storm” is about just that.

It amused me no end to watch him, while Adam and Megan discussed the crystals.  I think Tim Minchin is an amazing talent, even his tinkering on the piano as he warmed up was a pleasure.  He played a Crowded House piece on the show, so ‘straight music’ rather than comedy, which is when I find him the most moving.  Here is a beautiful piece I found, that reminds me of my brother who used to play the Notting Hillbillies version.  This one is for you Julian.  Just a warning -it made me cry…

The “American Dude” that wrote “Feel Like Going Home” is Charlie Rich.

The episode we saw taped is screening tonight, on Channel 2 at 8:30pm.

One thought on “Distinctive”