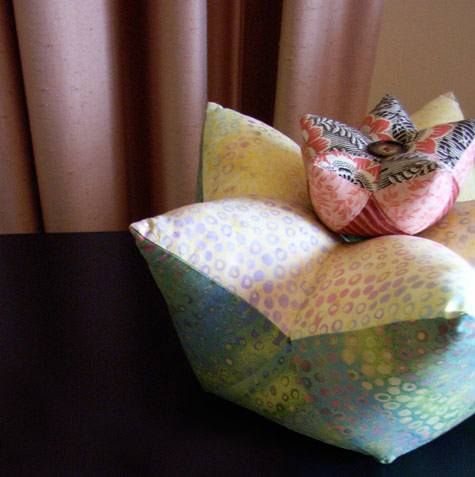 The light has been terrible for the last few days, so I am not making much progress with my tutorial.  I decided not to make you wait until it was written to reveal what the sneaky peek was of.   It was actually two things, which I have since found out are called Lotus or Tulip Biscornu. 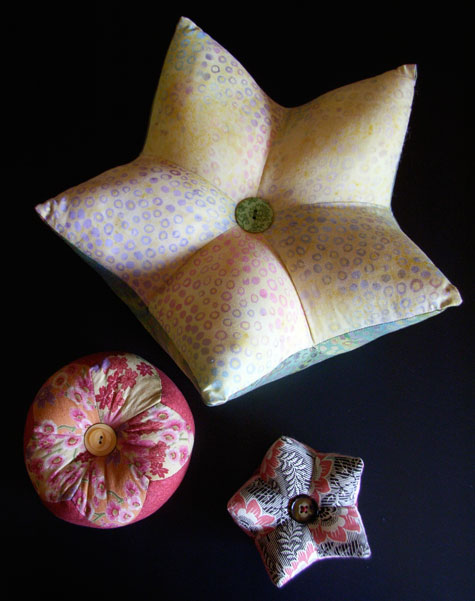 The word Biscornu is derived from a French adjective, meaning skewed, quirky or irregular, and usually refers to an 8 sided pincushion or ornament made with 2 embroidered (or cross stitched) squares, which are joined after one is rotated 45 degrees..  You can see some here and here.

These are a variation on 15 sided Biscornus, which, when joined slightly differently, result in the Lotus Biscornu.

I first came across these when Whip Up linked to May Britt’s tutorial for a pincushion back in April 2007, using a paper piecing method.  When I tried to make one back then, I made a construction mistake and got that doughnut shaped thing you see there, that I have just found out is actually a 15 sided biscornu (Thanks Melanie).  The other day, I finally got around to trying again with some scraps (although I made mine on the sewing machine) and made the small flower shaped thing you see above, so my ability to follow instructions has improved!

I was completely smitten with the result. 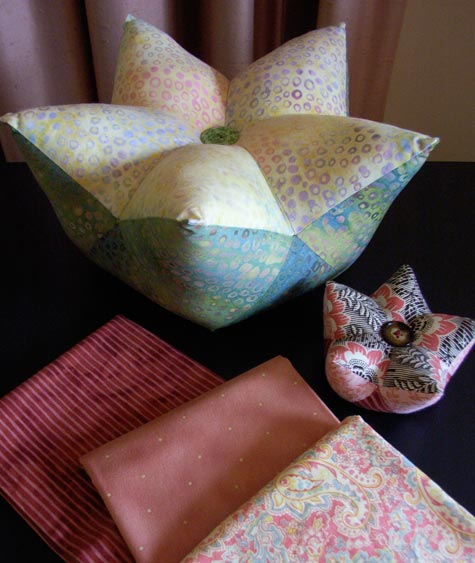 Immediately I knew that I wanted to make a bigger one.  May Britt’s tutorial calls for 2.5″ squares, but I made the small one above from scraps I had on hand, so they are 2″ squares.  I scaled up to 4.5″ squares and made the larger green one, which is roughly 10.5″ across.

I wrote to May and she was kind enough to give me permission to write up a tutorial with measurements to make a larger one, so I have been working on one that starts with 6″ squares, which I calculate will end up about 14.6″ wide.  I am using the pink fabrics that you see in this photo.  If you would like to make one too, you will need 15 identically sized squares, out of two or three fabrics.

I will be away this weekend at the 10th annual (and sadly final) Loch Quilt Hanging, and then on Monday the delightful Lily is coming for a visit – she has just moved to Melbourne.  This full schedule means that you will have to wait a few more days for the tutorial.  I hope you can be patient with me.  In the mean time, why don’t you check out May’s tutorial and make a small one.