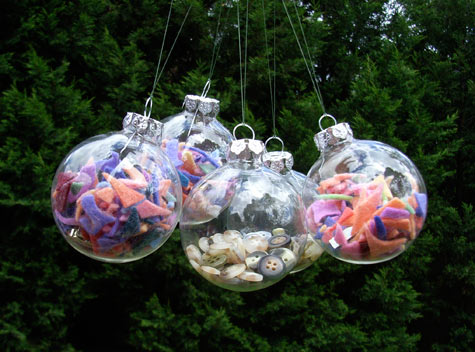 These are not quite as clever as some others I have seen on the web, (featuring mini knitting and made up as tiny terrariums) but I had lots of fun filling these glass baubles with some buttons, and some tiny felt offcuts, which I have been collecting all year.  I have 4 more left, and I am thinking at that they will contain tiny pegs.

I think I will string these together, to hang as non-seasonal ornaments, so that I can enjoy them all year round.

There has been quite a bit of last minute crafting going on, which means no time to take photos before gifting.  This kind of means the gifts don’t exist, blog wise.  I thought I would show you other versions I have made of the same things.

This is “Thank-you Flower, which I designed in February 2008.  I made these for the three carers at Occasional Care, in three different colour-ways.  The spots you see are all french knots. 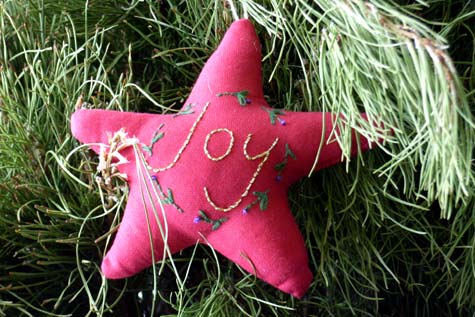 I also made a version of one of these (which I first designed in 2004) for the Kinder assistant – I have made her a different one every year, which together make up a set.  This year’s one was gold, and said “Family” on it.  Others have been “Love”, “Peace”, “Hope” and the “Joy” one you see here. 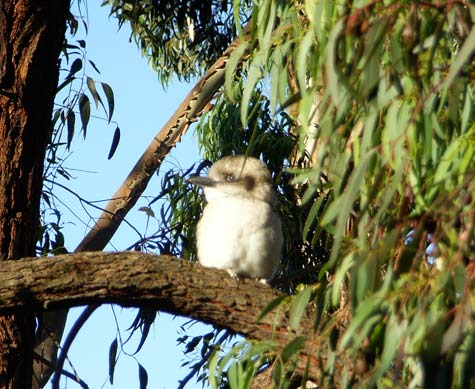 The officially started the long summer school holidays yesterday, so we are going to have lots of time at home.  Thankfully it is not too hot yet, so we are really enjoying relaxing in the garden around our new house.  This little fellow (or gal) has been hanging out a lot in our yard too – a juvenile kookaburra.  He/She is often in the tree outside Rory’s window (where I took this photo) waiting patiently for his family to feed him/her.

I think if we ever named our house, it would have to be called “Kookaburra Hollow”.  Does anyone out there live in a house with a name?

3 thoughts on “Baubles and Unphotographed Crafting”