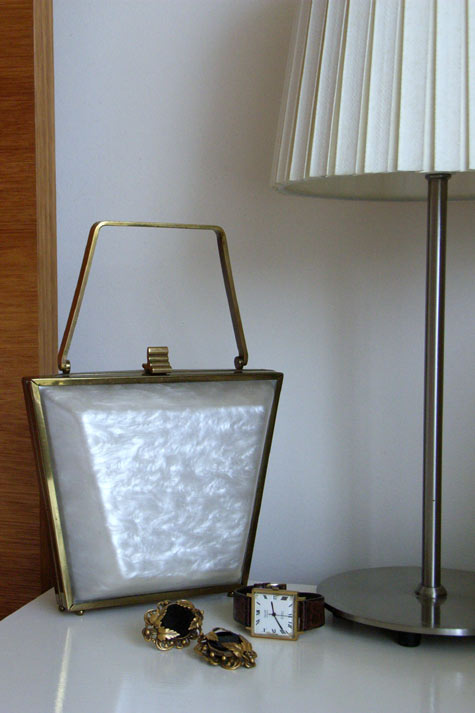 Way back in January 2008, when I started this blog, one of my first posts was about this handbag that belonged to my Great Aunt Rita.  It is one of my most treasured possessions, and I always wished that I knew more about it.

Thanks to a recent episode of Collectors, I now know that it is a Lucite Handbag, probably from the 50’s.  “Lucite is a type of plastic which was used in aeroplane manufacturing during the World War II. After the war, it was allowed for use in the production of luxury goods including Lucite handbags.  These glamorous bags were made in America and almost entirely in New York”.

There are no trademarks on the bag so I am not sure which manufacturer made it, but it sounds like it is highly collect-able.   As mine is in very good condition, it could be worth a bit, but of course it is worth far more than money to me.

On another note, here is a really interesting (long) article about measuring childrens’ ability to delay gratification, and what that indicates about their ability to achieve in life.  It starts off describing “The marshmallow experiment” from the 1960’s where pre-school kids were given a marshmallow, and told they could eat it, but if they could wait until the researcher returned, without eating it, they could have two, instead of just one.  Only about 30% of kids could wait, and some kids ate the first one almost immediately.  The article is about the ability to master self control, and I found it via Unclutterer, another interesting website about taking control of the stuff in your life.  The people at Unclutterer mention the article in the context of training yourself into “having routines in place that keep the clutter out of your home and office and the self control and diligence to systematically complete the routines that keep your life in order.  Doing these not-so-fun tasks everyday ultimately pay off because you have more time and less stress in your life overall”.

It all sounds so good – I read Unclutterer because I wish I was a little better at dealing with all the “stuff” in my life (school notices, bills especially) but it all makes me wonder – as a 4 year old, would I have eaten that Marshmallow – would my kids?

What about you?  mmmmmm, marshmallow………