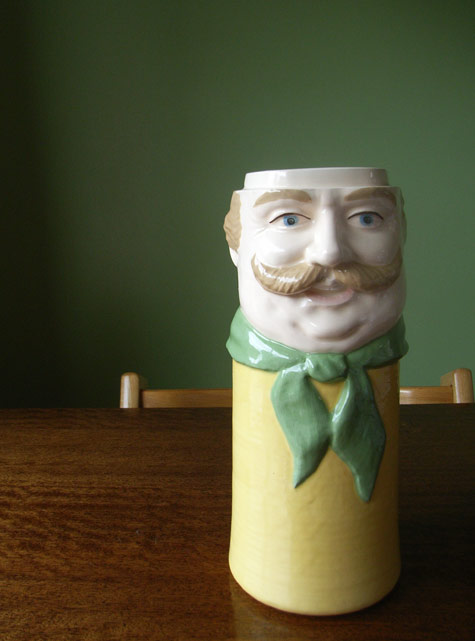 This is my cooking man.

For the first 26 years of my life he lived in my Grandma’s kitchen.

Since she passed away he has lived in mine.

Since Sunday he has been without his hat – he will never wear it again.

We woke up Sunday morning with Ants all over the kitchen – there was no food left out, they were searching for water, thanks to the big dry.  In cleaning up, his hat fell off, and shattered into hundreds of pieces.

I sobbed for about 10 minutes. 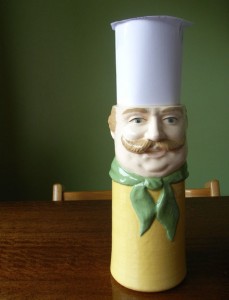 Let me just state for the record, that there are probably only 3 or 4 things in my house that would actually illicit such a response from me.  Even as I sobbed I was thinking of the people who have lost their whole homes full of precious things in the bush fires – feeling kind of guilty that I was taking it so hard.  As I cried I was thinking, how lucky am I that this is all I have lost.  It didn’t make the loss any smaller though.  Thankfully it was me that was carrying him, I would hate anyone else to see me cry like a baby and feel responsible.

Amelia, my wonderfully creative daughter has made a new hat.  Five minutes with the paper, scissors and sticky tape, and he is a new man.  Now I have two people to associate with my cooking man. 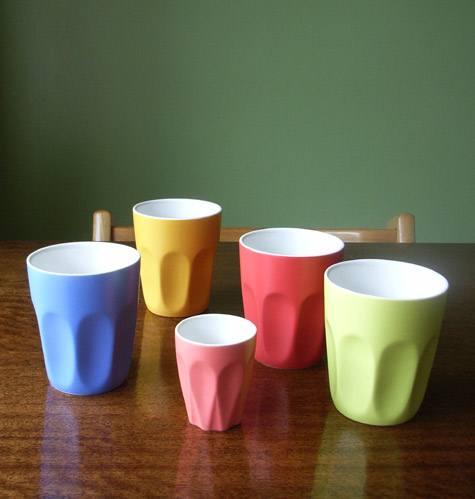 Today I came home with these beautiful gelati coloured mugs (Confetti Latte Mugs from Maxwell & Williams).  Not only do they come in a whole rainbow of colours, of which these are only 5, but the matt texture on the outside of them is just divine.  Michaela is completely enamoured with the tiny pink espresso mug, and has been sipping water from it all afternoon.

I didn’t need them, they were an extremely indulgent purchase, but as I unpacked them the penny dropped.  They were kitchen specific retail therapy.

These frames were another purchase – an amazing bargain.  Every second one cost$1.91, the other ones were $3.83.  Target were doing a 50% off the second frame, and these just happened to be heavily reduced.  But that’s not all.  Each one is really a two for one.  Here are the other sides…

Now I just have to stay away from the shops for a while – I should only be buying stuff I really need.

Made any entirely emotional purchases lately?