Yesterday Luke came home with a fantastic surprise, the first DVD of Season Two of “Rome“, from the video shop.  Woo Hoo, get the kids to bed and break out the Maya Gold Chocolate (Fairtrade, so guilt free)!

We both love this show.  The first season screened quite some time ago on free to air TV (very late at night), but the second season was picked up by a cable channel here, so we have not been able to watch it until it hit the DVD store.

Luke has quite an interest in Rome and read his way through the Masters of Rome Series by Colleen Mc Cullough.  One of my favourite reading pleasures is re-reading The Sarantine Mosaic by Guy Gavriel Kay (also a favourite author).  Although this is based on the Byzantine Empire and set in a much later period, much of the culture is the same, I don’t know how many times I have read it.

Last night’s two episodes didn’t disappoint.  I was even glad to see the Roguish Titus Pullo, despite what he did at the end of last season – strangely charming and thuggish all at the same time.

So enough links, and enough about Rome.  Here is a photo of the next little project to join the list.  A mug bag to take my new mug to sewing each week. 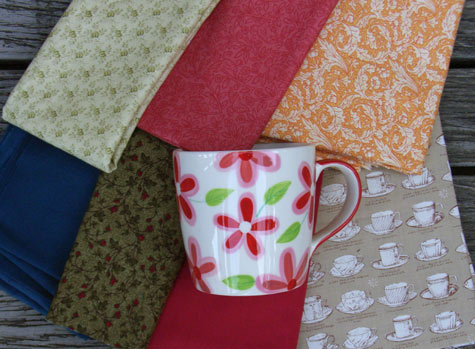 I’m not sure exactly how I will make this, but I think there will be a teapot motif involved :-).

This is the other side of the Mexican Ladies Apron. Thanks Debbie for reminding me to take a shot of it.

While the sun was shining, Luke and the kids cleaned out the car.  With the back seats down, the kids discovered that there was even room to lie down.  Of course they didn’t want to get out for ages. 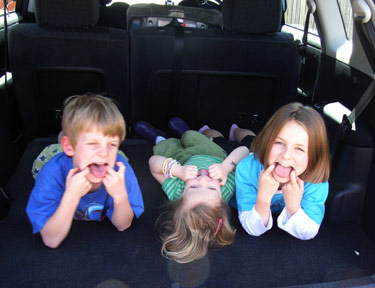 Tomorrow we are going to hop in our nice clean car, and drive into one of the busiest suburbs in Melbourne to see Luke and his new office.  I’m a bit nervous about the parking, I have never been there before, but we have a plan for day one of the school holidays.  After that, I am making the plan up as I go along.