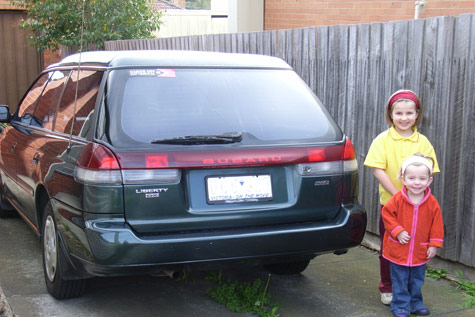 Yesterday morning the girls said good bye to our old car before school, there were even kisses bestowed.

Rory was on the couch, where he has been since Monday with a sore tummy and intermittent fevers.  Every time I thought he was improving, he took a turn again.  Yesterday morning he seemed to be a fair bit better, so I gave him the choice between him going to Grandma’s house or Grandma coming to stay with him.  I was crossing town with Michaela to pick up our new car (and leave the old one behind).  Rory decided a change of scenery was the way to go, so I dropped him off at Grandma’s house on the way.

By the time we returned to pick him up, Rory was a lot worse.  I packed him up in the new car, and brought him home.  As we pulled into the driveway, Rory threw up. 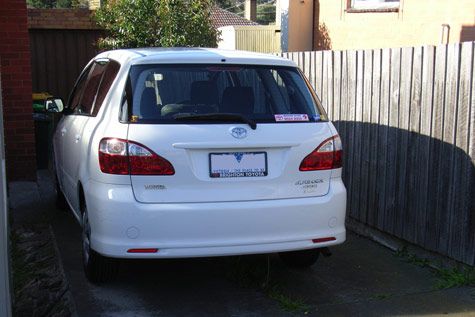 Luckily, he managed to aim it all in the sickie bag that I had transferred from one glove box to the other.  I was so impressed.

As he seemed to be getting worse over the course of the week, it was straight off to the doctors that evening.  The GP was concerned at his localised pain, so we were redirected to the Hospital, with appendicitis on the cards.  From the GP we went to the train station to pick up Luke, and after a quick change of clothes and a hurried sandwich, Luke went off to the Childrens’ Hospital with Rory in the new car.  I was more than a little concerned about Rory, but some of my worry was also for Luke, who was trying out our new car, in the dark, with a sick little boy moaning in pain in the back seat.

Rory was clearly quite sick, but as he was able to climb up onto the bed, handled driving over speed humps on the way in, and seemed to improve a little as the evening wore on, it was looking like his appendix could remain inside his body.  Of course, it took several hours to reach this decision, and Rory was not able to eat, drink or have pain relief during this wait, so the evening took it’s toll on both of them.  The pain may possibly have been caused by the lymph nodes surrounding his appendix, being inflamed by his illness and causing the localised pain.

In the wee hours of the morning, Luke was advised that the could either take Rory home, or they would find him a bed for the night.  Luke choose the former.  Today Rory was still pretty sick, but not in the same pain, and starting to improve.

On Monday, Rory and I did a little drawing to pass the time.  I taught Rory the magical rule about drawing eyes, which I always wish I had known earlier on (I think I was in my teens when I learnt this).  Eyes should be drawn in the middle of the face, not towards the top.  We drew a page of oval faces, each one quartered to show us the middle.  Here are two drawings from that page.  The one on the left is Rory’s Yoda, and the one on the right is a little baby I drew, when I was playing with head shapes, and proportion.  He does look at little blocky though. 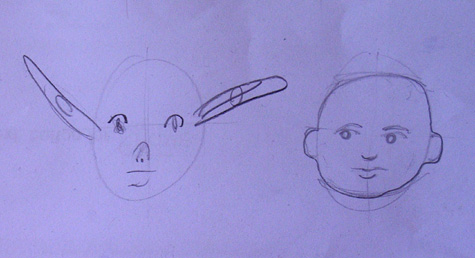 This baby led to a whole new page of babies (and no, I am not clucky, but an idea for a little cloth baby is brewing). 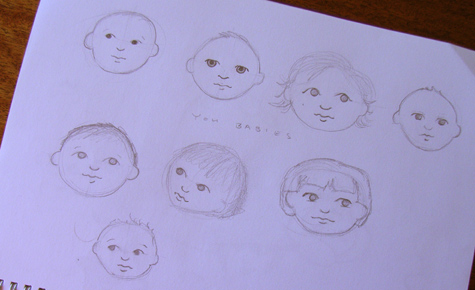 Rory loved the slightly angry/spooky looking baby in the top row, second from the left.

Perhaps Rory and I will do some more drawing tomorrow, and I may even answer some emails, and reply to some comments.  Tonight I am off to bed, for hopefully a less eventful night.