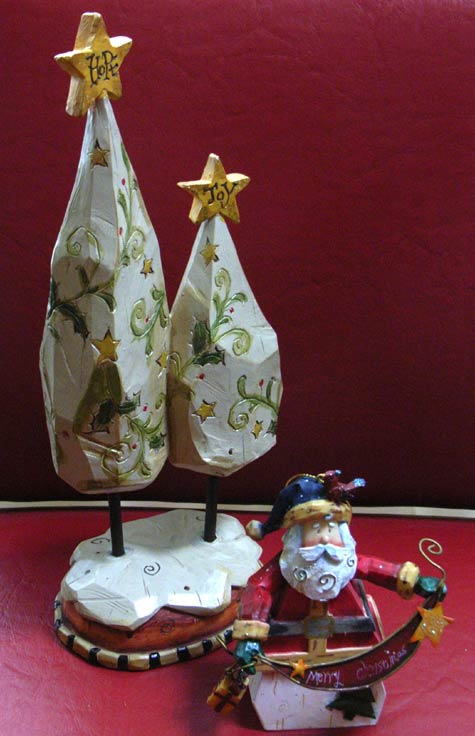 For anyone who is reading this in the Northern Hemisphere, Christmas in July parties are quite common down here, so that we get to eat all the traditional foods in the season they were intended for.  Unfortunately I have not been to, or had one of these parties, but these ornaments are new aquisitions, so together with the Redwork Christmas Quilt fabrics, I have a lot of Christmas stuff about the house at the moment.

I would never have guessed as I set off yesterday for the Craft and Quilt Fair, that these would have been what I would bring home, but the bargain was too good to resist.  The little Father Christmas was only five bucks!  They were from a stall called “Raggedy Country Christmas” which was doing a roaring trade.  I particularily liked the trees, because I prefer ornaments that mention the real meaning of Christmas, rather than just the Man in Red.  The Trees have “Joy” and “Hope” written on them, and they seemed a little more subtle than the usual gaudy ornaments around.

Mum and I browsed the stalls first, until we met a friend (Hi Debbie) and went through to the Quilt exhibition to look at our lesiure.  This is the disperate collection of things that I bought at the stalls. 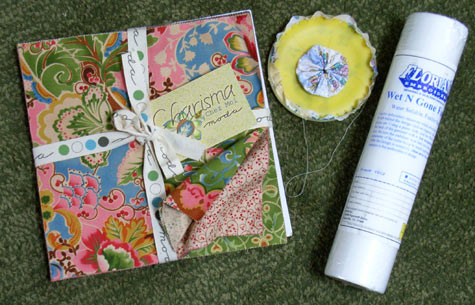 The Charisma, Chez Moi Fabric is a collection that I have admired for a long time, and I lingered looking at this layer cake, before deciding that I did just need to have it!  The squares are 10″x10″ swatches, and there are 40 of them in the pack.  I think I will cut each sqare into 4 and make a quilt of just squares, as some of the patterns are quite large and I don’t want to cut them up too much.  This plan may of course change by the time I come to use them.

I got some Floriani Wet and Gone Fusible, which I have big plans for.  There is a technique I have been dying to try, to speed up my applique.  I will post more about this when I get a chance to use it.

Last of all I got a very large Yo Yo maker (made by Clover) that I thought Amelia might enjoy using (and she does, she has made several today).  I am not usually a fan of Yo Yo’s (or Suffolk Puffs) at all, but I saw this delicious quilt and was won over.  I also thought Amelia might like to make a Yo Yo Garland to decorate for her birthday next month.

The exhibition of quilts was immense, there was so much on display.  I particularily enjoyed the section on Japanese Textiles, I was quite taken with the little children’s garments made of scraps of other garments – using more scraps made the garment luckier, as did using scraps from very healthy people or families with lots of children, (from memory).  There are some very talented quilters out there, and so many people with much more patience (and time) than me.

3 thoughts on “Christmas in July”