There has been quite a bit going on this week, which has resulted in the general lack of posting.  The main thing is that we are in the middle of 2 weeks of school holidays, but we also had a very big day on Wednesday, from which I am still recovering.  WARNING: for those that are here to see craft only, skip the next section and scroll down to the crafty photos 🙂 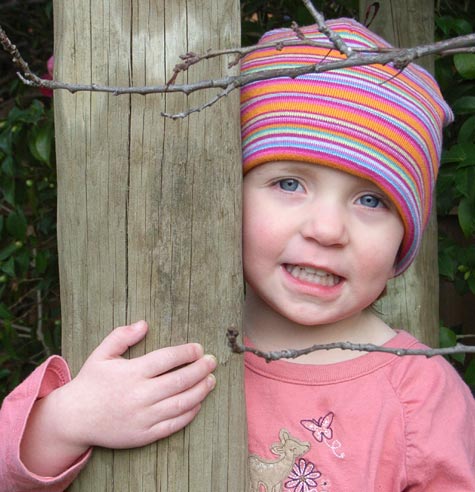 Essentially, Michaela had a funny turn just after getting up that morning.  She turned a funny colour, went all floppy in my arms, was spaced out, and clammy – she did respond to me talking to her, but her responses were delayed.  I laid her on the couch and called “Nurse on Call” to ask if I should be calling an ambulance (if “Nurse on Call” was not an option, I definitely would have called a ambulance first) and they got me to answer lots of questions, and get Michaela to do certain things – she passed their tests, so I was advised to take her to the GP rather than the hospital.  By this stage Michaela had improved a lot, she was no longer floppy, but she was still spaced out.  The doctor saw us straight away, and found no signs of infection/temperature etc, but also thought that Michaela was altered – she was still listless and spaced out. She managed to take Michaela’s blood pressure and heart rate etc, which she recorded and sent us off with a letter to take to the children’s hospital for further investigation.  She was thinking Absent seizures or Cardiac problems.

You see, back around the time that Michaela swallowed the crystal, she also had several episodes of fainting (a few days prior to swallowing the treasure), and was investigated for serious heart problems.  The Cardiology Department at the Childrens’ were very thorough, and found no signs of a problem – they felt that the fainting was extremely likely to be harmless , but as she hadn’t had an episode while wearing a monitor (even after a 24 hour stint in one) they were not sure of their origin, and were going to keep a close eye on her until she was old enough to do a stress ECG – the only test they were unable to perform.  The wanted to see her again if anything strange happened – this definitely qualified.

I dropped the other two kids at a friends (eternal thanks Silvana) and went, with my wonderful Mother as support, to the Childrens’ Hospital, where we were seen very quickly.

About 4 hours and many tests later we were sent home.  The diagnosis was a near faint (pre-syncope) of the Vasovagal syncope variety, triggered by sitting on the toilet trying to poo (a common trigger)!  This was really good news, as other diagnoses on the cards were very serious.  The heart rate recorded by the GP was low for a child Michaela’s age (but normal for an older person,so it didn’t particularly alarm the GP), and was probably even lower when she was floppy at home.  This all casts a more positive light on her previous fainting, which was triggered on at least two occasions by being tickled (unfortunately, we don’t really tickle her anymore).  Even though Wednesday was a traumatic, scary day (which I don’t want to repeat) the upside is that it reinforces the suspicions of the Cardiologists that her fainting was benign.  We are to go back soon to see a paediatrician at the hospital, to talk about this some more – I have quite a few questions about managing this tendency of Michaela’s – but overall the outcome puts many more serious worries of mine to rest. 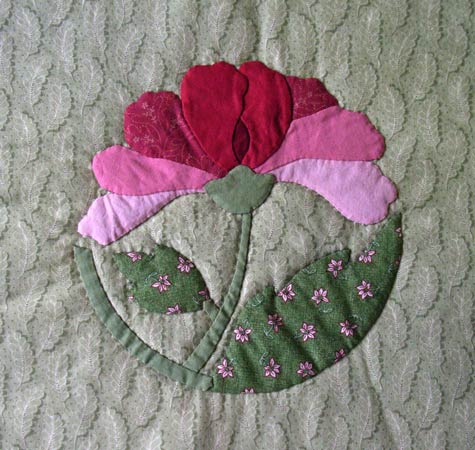 Here is my contribution from the archive this week – A Peony I made for my Mum’s Birthday a few years ago. The design is based on an ancient Japanese Family Crest and is taken from this lovely book. 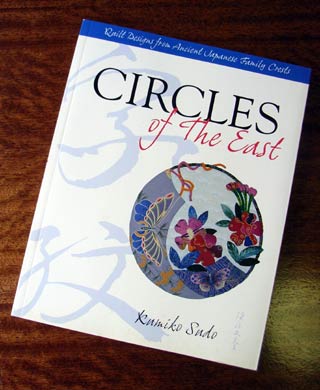 The author adapted them for Applique designs, and here is a photo of her design made in colours that have particular significance and meaning. I find it a little busy myself. 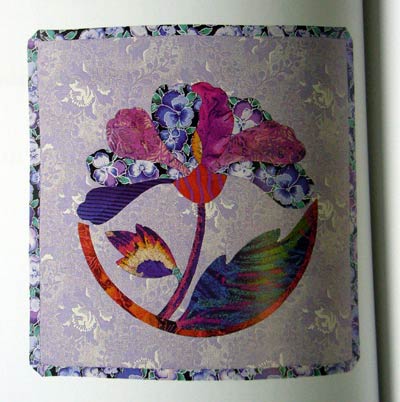 There has been some more crafting going on here yesterday, but as this is such a long and eventful post, I will save details for another time.  Hope life is more uneventful for all of you, my lovely readers.

4 thoughts on “A Drama and The Friday Archive”