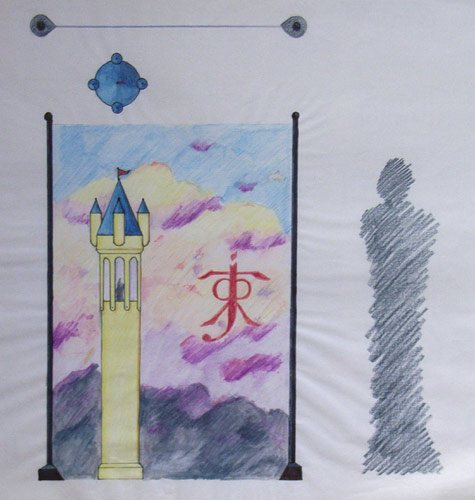 This was a short project to design a display case for a small object, that was in keeping with the style of the object. I chose a small Lord of the Rings Pewter Statue, (which was actually part of a chess set that belonged to my boyfriend of the time) which was about 10cm tall. I am not certain now, but it may have been Gandalf. That shadowy figure in the image, on the right, is a person, to indicate the scale of the display case.

Anyway, this display case was to be mainly made out of segments of PVC piping (as in plumbing pipes) which were subsequently painted, and behind it was a painted silk screen. I would have had to detail it’s construction on separate drawings. I believe that it was a large part of the brief that the display case could be made of readily available materials, and not be too expensive to construct.

I think I did pretty well on this project (got good marks) and you can see from this image that I have always had a thing for sunsets and lot of colour.

Now to the culinary disaster that I mentioned in the title.

Last night, as we were cooking Rory’s birthday cake, the oven made a large bang, belched out some smoke and stopped working completely. Unfortunately, Rory’s cake had barely started cooking. I left the kids with their Grandma and Nanna, who were over to share in the festivities, and raced to the local supermarket to pick up an alternative Cake. The best I could do was that fine example of Antipodean cuisine, a Pavlova. I purchased a base, and decorated it with cream, crushed Peppermint crisp and Flake. Rory was quite happy, and it was certainly something we could whack the candles into and sing a certain birthday song.

Later, Luke scooped out the mush that was the cake, put it in a suitable container, and we cooked it in the microwave. TaDa, looks fab doesn’t it. 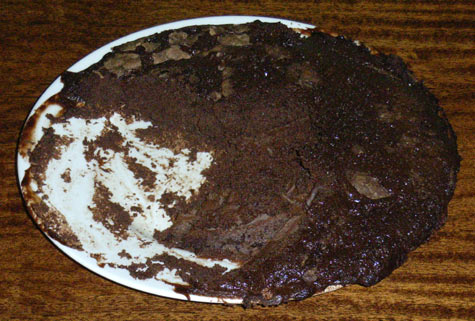 The funniest thing was that when Luke opened the microwave, we discovered the softened butter that I had forgotten to add to the cake. It was never going to taste that good, but at least I could blame it on my oven, that’s what mature adults do.

One thought on “The Friday Archives and a Culinary Disaster”