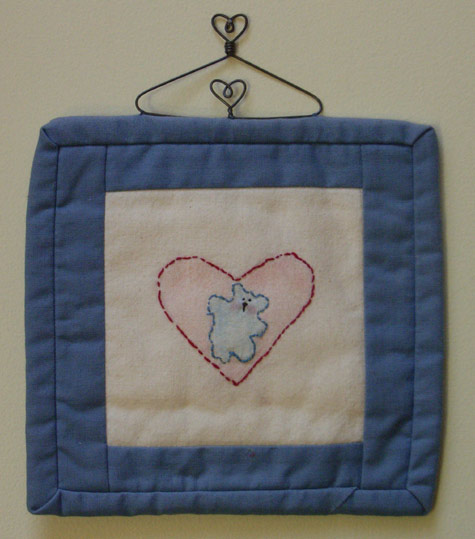 When I wanted to teach the kids how to sew, I decided to start with back stitch. I figured that it was the easiest stitch to follow along a line. One of the main things I learnt was to give them shapes to stitch that didn’t require any backtracking, (ie. letters s or o or l are good but t or a or x are tricky, as you need to stop and start again in different places). The above Heart and Teddy shapes are both simple outlines made by single lines that begin and end in the same place. I borrowed them from the design of this quilt. The kids did all the hand stitching except for the faces, and I did the machine sewing.

Amelia stitched this in two days when she was five and a half. Rory wanted to join in too, but found it a little harder at three and a half (which was no surprise to me, but he loved to do whatever Amelia was doing). 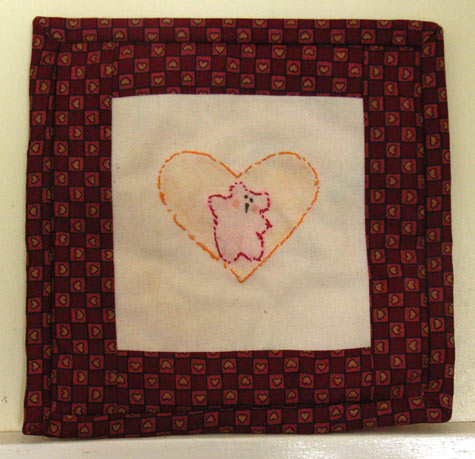 Rory picked it up again over a year later and finished it, and only now have I taken the time to put borders on it and bind it (the pins are still in binding at the back, which is why it looks a little wonky. I am going to hang it under Amelia’s one, but can no longer get the dear little hangers, (unless anyone out there can point me in the right direction) so I will have to think of something else.

I have been turning the kids’ drawings into stitcheries on things for years. Here are two of my favourites, taken from drawings that Amelia did when she was younger that I have stitched onto clothing. The first was done when she was about five, and is on a windcheater. 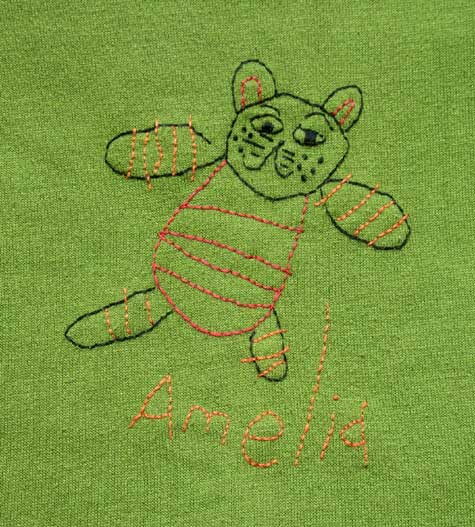 This second one is a portrait of her father that she drew when she was four and a half. I put it on a top for Luke for that Christmas. I recreated Amelia’s lines exactly, but just changed the colour of her black lines to white. I love the big eyelashes. 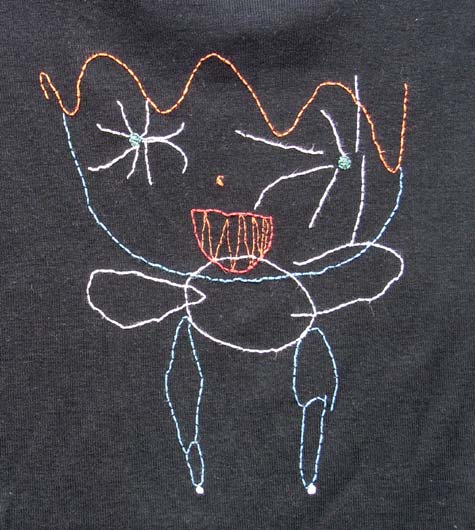 Both of these required quite a complicated method to mark them out, as even a light box was not going to work. I used coloured pencils, unwaxed baking paper, ordinary sewing thread and finally the stranded embroidery thread that you see here now. One of these days I will have to make a tutorial, as it takes quite a few steps to mark out this way. How do you mark out designs on black or very thick fabric?