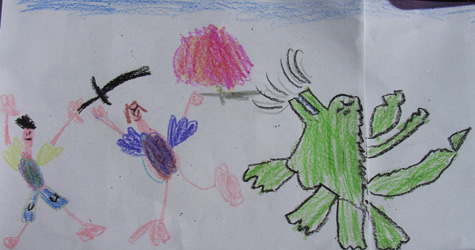 It has been a busy few days here in the Matching Pegs household, and I have nothing to show you. Instead I thought I would give some of the spotlight over to the kids’ creative endeavours.

This is a picture that Rory created this morning, of a dragon and some knights. He has been spending lots of time lately creating enormous posters, made of 6 or 8 pieces of A4 which he has drawn on and taped together. They are all wonderful creations, but a little difficult to store. 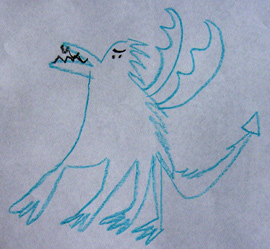 I think it has really shown us that his concentration span is improving, as he has been sitting and drawing for much longer than he ever has before.

He enlisted Amelia’s help for this drawing – asking her to draw a dragon that he could copy. Hers is the blue version.

The kids also spent quite some time this morning “driving to the snow”. This involved lining all the chairs up in a row, like a bus, and wearing all the warm hats, scarfs and gloves they could find. Here is Michaela on the bus, wearing Amelia’s oversized beret. 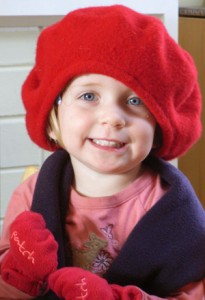 On Friday night I appeared in the Wedding Dress Parade that i have been mentioning lately. I wore a wedding dress from the same year that I got married, 1998 (Not mine) and the bridesmaid dress I wore to my sisters wedding back in March. It was a lot of fun, and I am hoping that someone I know took photos. It was very strange to see my wedding dress on someone else, especially as the model had very dark brown hair, her colouring was quite different to mine. It was really nice to get it out again. The last parade was 13 years ago, and my Grandmother’s dress was in it. Since then, the moths have gotten to it, and it has been thrown out. This certainly makes a case for letting the world see them while the dresses are in tact. The money raised for the Migori Orphanage in South Western Kenya was over $2,200 AUD, so it was a very successful night.

I have spent the last few weeks working on a secret project that I can’t show you until December. It is very exciting, and has been taking up all of my creative time. In December I promise to show it to everyone! 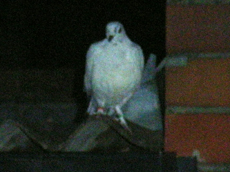 Last Thurday we had a charming little visitor.

Michaela was the first to notice the Homing Pigeon on the garage roof, in the shelter of a short brick ledge that tops it. She could see him out our kitchen window, and said “look Mummy, a white birdie”. Being dusk, it was hard to get a photo, but with the naked eye we could see its little tags around its legs. She/He stayed for the night, and I saw him/her again in the front garden the following afternoon. 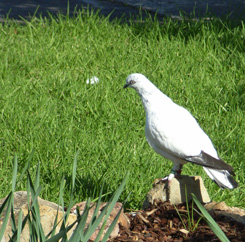 By the time we walked back from school, it was gone, and all that was left was a collection of 5 white feathers on the lawn. I am sincerely hoping that they fell out as the pigeon was walking around out there, and not as a result of the intervention on a neighbourhood cat. You can just see one of the feathers in the background of this photo, so it is possible that the feathers were ready to come out. Hopefully the little white birdie is winging its way home or already there. That is all my news, but here is a picture that I couldn’t help taking of a forlorn little leaf on our magnolia tree. You can just make out some of the buds that will be amazing flowers in a month or two. What’s growing in your garden? 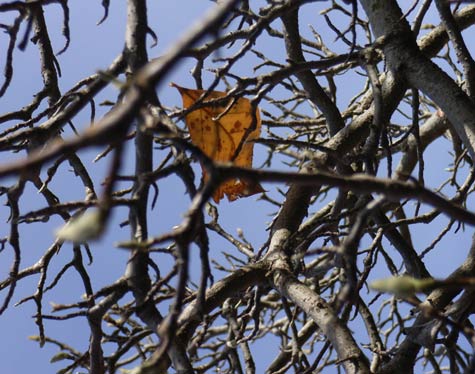