Frustrated by the hindrance that my cubital tunnel syndrome is causing me, I have not been game to do any hand- sewing until yesterday. I was keen to join in on this project from Lynette Anderson’s Blog, and luckily this month, the dove is only a tiny 2 inch design. It was a nice small test for my arm.

I chose embroidery floss that I already had in my stash, and have a particular colour-way in mind for the fabrics, lots of warm colours – yellows, greens, peachy/coral tones, browns/terracottas, as well as lavender and that slightly greyed blue, (like the colours in this project I have on the back-burner).

I also decided to colour the calico prior to stitching, (like I did in this project), so I got out the derwents and had some fun. Here is the finished stitchery, which is waiting for its fabric border. 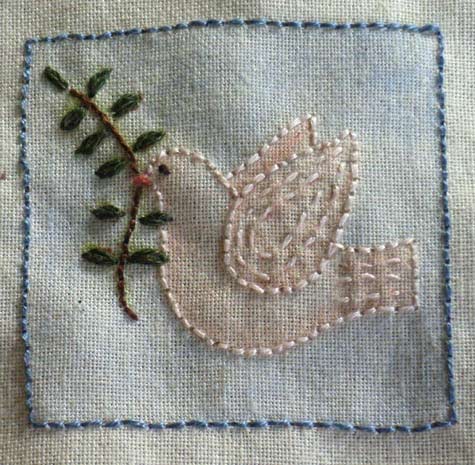 Even this was a little too much for my arm, so I will be waiting a little longer before I attempt the bunnies, (which were actually from last month, right in the middle of preparation for my sister’s wedding) but they are coloured and waiting to go. 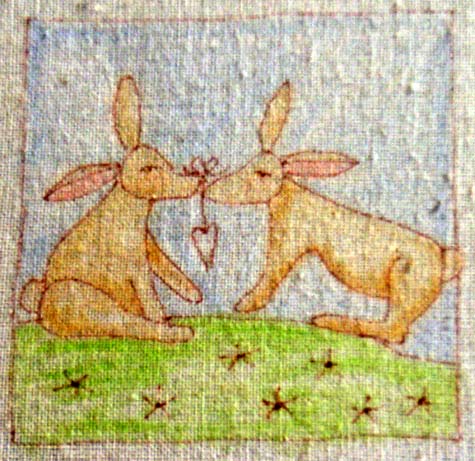 Today I decided to do a tiny bit of machine sewing during Michaela’s nap, to cheer me up. Here is the quick project that I came up with. 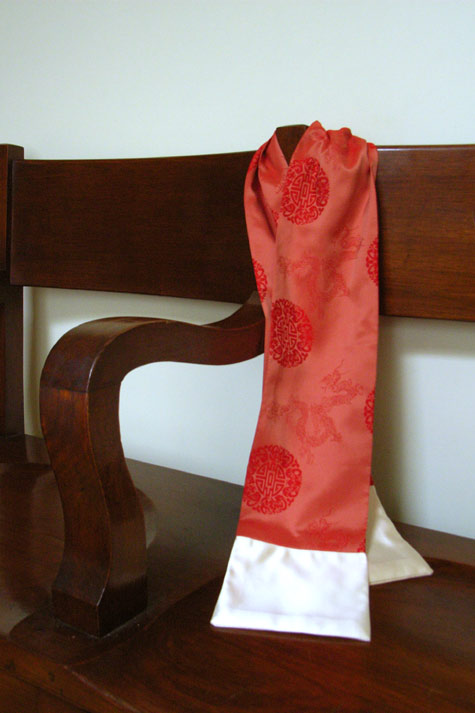 Our church is currently planning for a Wedding Gown Parade, and I have been working on the invitation/flyer and ticket design.

My gown is going to be in the parade, so a couple of weeks ago I opened up it’s storage box and tried it on. I could fit into it and do up the zip – that is, up to where my bust started. 10 years and 3 kids has left me with a different body than I had when I wore it last, so someone else will wear it in the parade. Trying it on was not as bad for the ego as I had feared – it fitted over my waist and hips! One thing my mother and I obsessed about was the colour of the fabric we used for the different dresses, (my mother made all off them) – what a surprise.

My dress was a creamy colour, but rather than being a cream made by adding yellow to white, it was a sort of rich mango cream colour. My bridesmaids wore a shade of copper.

The ends of the scarf are made from scraps of my wedding dress material, and the rest of it is a remnant that my mother was getting rid of in a fabric purge. Perhaps I will wear it on our 10th anniversary later this month. I only wish that my photo could capture the colours more accurately.

3 thoughts on “A Dove and an Anniversary Scarf”