I have been seeing a lot of single letters used in decorating lately, (check out this amazing wall on the House on Hill Road Blog I saw, via Apartment Therapy) and thought I would jump on the bandwagon with an offering in fabric.

A photo tutorial that Kathy Mack put on her blog Pink Chalk Studio got me thinking about a way that I could do the inside “holes” in the letter. Kathy’s tutorial is for covering switch-plates, (the cover around the light switch). Decorative switch-plates is not something that you see much of in Australia, although my Brother-in-law and Sister-in-Law just bought a house with ceramic, hand-painted, floral switch-plates. Perhaps it is a trend that is yet to come? 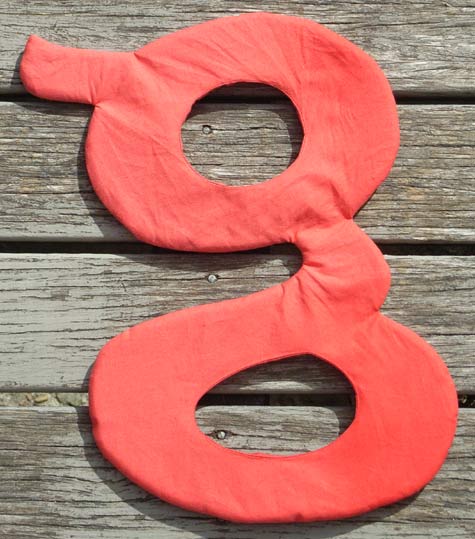 The centres worked out just as I thought they should, and I was quite pleased with the effect, all except for one thing….it’s backwards! That’s why this poor little letter has not even been pressed.

At one vital point, I failed to place the front “right sides together”, because with the facing for the holes already attached, the front looked rough and I thought of it as the back.

I even took a picture before proceeding, without twigging that I was mucking it up, (see below). 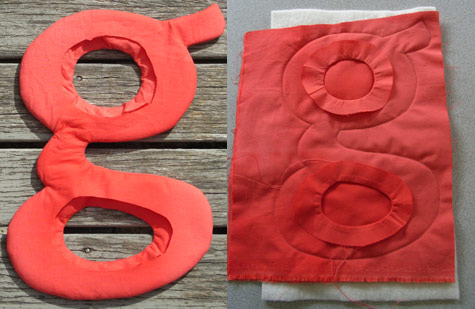 So even though the back of it shows the letter the right way around, because of the method I chose, the back does not end up looking very nice.

Luckily, I have not really wasted any vital resources, as this was a test letter. The fabric I used was an off-cut from sheeting fabric I purchased over 10 years ago at the Queen Victoria Market, which I had made up into our first doona (duvet or continental quilt) cover when we got married. It was a piece that had irregular dying problems at the edge, which is why it was being sold at the market. I still love the colour – that almost-red orange. I remember being told by the stall holder that it was a “second” from the “Art Park” range, a home-wares range that had bold colours which I loved. Cath Derksema of Art Park went on to get together with Kirsten Junor to form Prints Charming, a beautifully bold fabric design studio. Their initial ranges were all hand printed, but they now have their work released internationally by Marcus and Free Spirit Fabrics.

So the fabric that I used for this poor backwards letter g was taken from the irregular dye lot stuff at the edge. It was never going to look that great, and now it looks a bit crumpled and confused.

Such is crafting, I will get it right the next time.

By the Way, did many of you turn your light out last night at 8pm for “Earth Hour“? We had a lovely little dinner party with friends, Peter and Lai Meng (hi guys). We sat in the cosy candlelight, after putting the kids to bed just in time for lights off.

One thought on “Alphabet gone awry”