Here is a look at Amelia’s current project, her name stitched out for her reader bag, for school. She chose the variegated thread from a couple of packs of DMC threads that she won as part of her prize. She chose the background fabric as well, and after I selected a pile of related fabric choices from my stash, we have a vague plan for how her new reader bag is going to look. In order to decide on the font, I wrote Amelia’s name in about 8 quite different fonts in an Illustrator file, and she chose the one she liked the best (the curliest of course). My selection were all ones that would look good as an outline. While this is by no means an ambitious project for Amelia, the deadline for finishing it (school starting) may be. I think I will be stitching quite a bit of it. Both Amelia and Rory have done some stitching today. After spending all morning, and some of the afternoon buying school shoes and clothes for the start of school in 18 days, they were both tired when we got home. Amelia picked up her sewing and Rory asked me to find his as well. He has not done any since about November, being far less interested than Amelia. Rory did about 5 miniutes stitching, finishing the head of his alien, before going outside to jump on the trampoline. Amelia lasts a little longer, but tends to do it in little bursts as well. She just picks it up far more often. 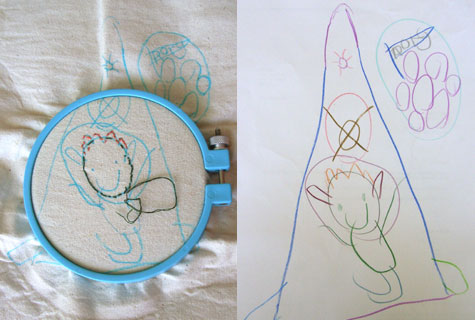 I must say I am very taken with Rory’s little alien, he has a very friendly face. The planet in the background has a flag on it just like one of the planets on the quilt I designed and made for Rory when he turned 2.

One thought on “Just a stitch here or there.”