What do you get when 2 designers have a child – a young designer of the year. 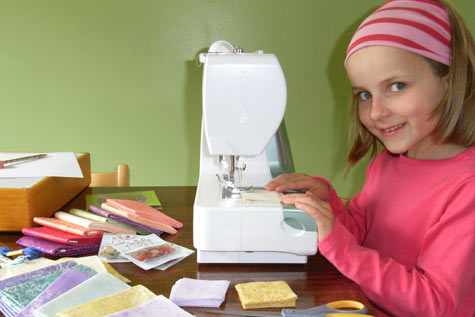 Our daughter Amelia has been announced as the winner in her catagory of 11 years and under for the Homespun Magazine’s Young Designer of the Year Competition, an Australia wide competition. She is pictured in the current issue (Vol 9 No. 1) and was also profiled as a runner up in the prior issue.

We were told of Amelia’s win way back in September, but due to publishing constraints, it has only just been printed. She won such a haul of stuff, (including a sewing machine, digital camera, printer, lightbox, crafting books and lots of fabric, buttons and sewing related notions) that we have only just managed to find places for all of the stuff in our little house. 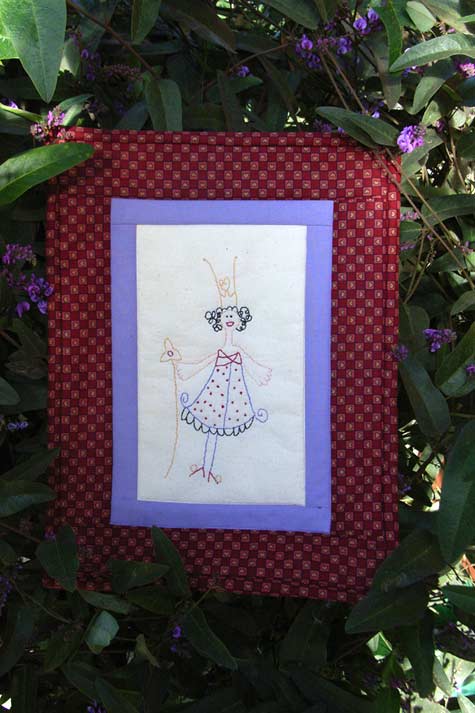 And here is the work that won her the prizes – “The Ladybird Queen”. Amelia drew this back on the 18th of March 2007, when she was 6 and a half. I transfered it the same day, and she started stitching straight away. The hand stitching – which took 4 months – was all done by Amelia, and I stitched it into a wallhanging. 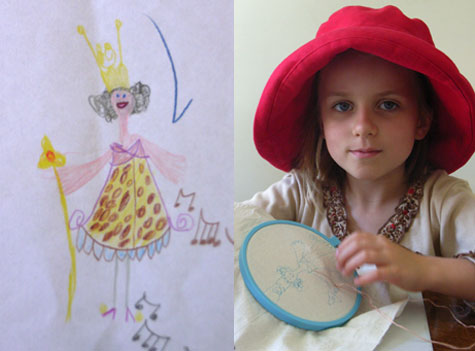 Amelia’s drawing was done with no suggestions from an adult regarding subect matter – she has an amazing imagination. While there were other things on the page, you can see her backwards tick in blue (she is left handed and often draws them this way) indicating that this figure was the one she wanted to stitch.

Here is a quote from the Editor, Bianca Tzatzagos, regarding judging Amelia’s entry; “I thought this project was truly charming – the drawing was whimsical and sweet, and the stitching was simply outstanding.” Apparently the judges decision was unanimous.

Needless to say, we are extremely proud of her wonderful achievement. Since winning the prizes she has designed a doll that she would like to make (from drawing many possible faces, to the details on the clothing), chosen fabric from her brand new stash to make a lap quilt, and is currently stitching her name out for her reader bag. If only Mummy had more hours in the day to spare for making things together. Rory is determined to enter this year with a stitchery of a drawing he has done of an alien in a rocket ship. I think he is convinced that if her enters, he will win – after all Amelia did.

Many thanks to the lovely people at Homespun, particularily Catherine Sanchez (Managing Editor) and Bianca Tzatzagos (Editor) with whom we have spoken several times on the phone to organise photos etc. Also thank you to the many companies who supplied prizes for the competition – our little girl is well and truly inspired to keep creating – this will not be the last you hear of her talents!